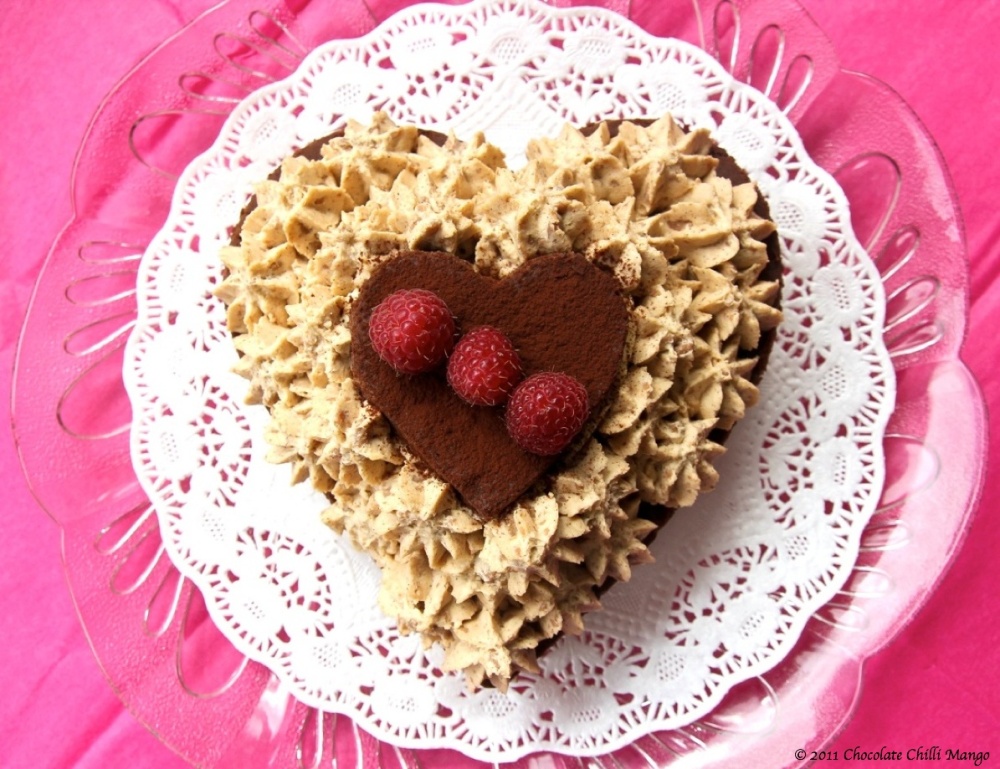 So Valentine’s Day … it’s an excuse to bake something, isn’t it?    This is something a little different to the usual chocolate cakes, pink icing and such.  I’ve been itching to make something with chestnut purée for a while now.   This wasn’t really what I had in mind but I also have a heart-shaped frame, purchased many years ago, that I have never used.   And Valentine’s Day is fast approaching yet again.  So I made a two tiered heart-shaped cake.  I used the chestnut purée in two ways: to make chestnut cake layers and in a chestnut cream for the top of the cake.  In between the chestnut cake layers I sandwiched an orange bavarois with Grand Marnier and studded with fresh raspberries and a light layer of raspberry preserves.

This recipe calls for unsweetened chestnut purée because that just happens to be what I purchased.  I really like it as it allows you to control the sweetness in anything you make.  However, if you prefer sweetened chestnut purée, you might like to reduce the amount of sugar for the cake and chestnut cream to avoid it becoming sickly sweet.

All up, it turned out really well.  If I sound surprised, well, I am … I’ve not made this cake before and I was a little nervous my great idea might not be so great after all.  Creating a recipe is a lot like composing music.  So I was pretty happy that the final result got some good reviews.  Win!   The flavours are light and fresh and adding the raspberries to the filling looks lovely when the cake is cut and adds an extra zing! to the bavarois.  The chestnut cake layers turned out to be a lot like a chestnut brownie, perfect.  Chestnuts, orange and raspberry with a mix of textures.  Not bad.  I planned to leave out the chestnut cream and just dust the top with cocoa and a few more raspberries.  It definitely would have looked more elegant, more chic.  I would have like it.  In deference to the main recipient of this cake, who has a love of all things made of cream, I piped chestnut cream over the top instead.  Looks a lot more twee to me, but apparently the chestnut cream “looks like kisses” and “really makes the cake”, so what do I know ;-).  The chestnut cream is pretty good though.

For the cake layers, I used:

As a guide, the dimensions are as follows:

You don’t have to make this in a heart-shaped mold.  A round mold of about 18cm would work just as well with a smaller top tier of 6 – 7cm.

Bake the chestnut cake for about 12 – 15 minutes until cooked through.  Remove from the oven and allow to cool before cutting.  Using the heart-shaped molds, cut out two large hearts and two small hearts.  I found I got an extra two small hearts as well (bonus).  The remaining “off-cuts” are also good to eat as is, or to use for an impromptu dessert (with cream at our house 😦 … but I digress).

Orange Bavarois
Whisk together the egg yolks, flour, sugar, and orange zest in a bowl.  Place the milk into a saucepan and heat until it starts to simmer around the edges.  Add the milk to the egg yolk mixture, whisking as you do so.  Return the pastry cream mixture to the saucepan, over a low heat, and stir until it starts to thicken and coats the back of a spoon.  Do not allow to boil.  Remove from the heat.  Pour into a clean bowl and allow to cool.  You can accelerate the cooling process by placing the bowl over ice and stirring the pastry cream and then placing in the refrigerator until ready to use.

Place the cream and Grand Marnier into a bowl and whisk until thickened.  Fold into the cooled pastry cream.

Soften the gelatine leaves in cold water.  Drain and squeeze the excess water from the gelatine.  Place in a large bowl over hot water to melt the gelatine completely, stirring it.  Once melted, remove from the heat and allow to cool.  When cool add the pastry cream mixture to the gelatine and stir gently until combined.

Assembly
To make sure that the bavarois holds its shape as it sets, I assembled the cake layers in the original heart-shaped mold, on a lined baking tray.  So that the bavarois didn’t stick to the sides of the mold, I used a strip of acetate to line it.  The acetate strip will peel away easily from the cake, leaving a perfect finish and no drag marks.  Line both the large and small molds with a strip of acetate as shown.  Place a chestnut cake layer into each.

Spread a thin layer of raspberry preserves on the bottom cake layers.  You will need about a tablespoon of preserves.   Divide and pour the bavarois cream into each mold.  Reserve the three best raspberries for decoration and set aside.  Press fresh raspberries into the cream, dotted evenly across the cake, for each tier.  Cover with a second layer of the chestnut cake.  Gently and evenly press the top cake layer to make sure that there are no gaps between it and the bavarois filling.  Cover and refrigerate until set.

Chestnut Cream
Beat the chestnut purée, sugar, and vanilla in a bowl until smooth.  Add the cream and gently whisk until thickened.

When the bavarois is set, remove the cakes tiers from the refrigerator.  Gently remove the metal molds from the cakes, holding the acetate lining in place.  Once removed you can peel away the acetate.

Fill a piping bag fitted with a decorative tip with the chestnut cream and pipe the cream on top of the large tier, surrounding the top-tier completely.  Arrange the reserved raspberries on top.

If, like me, you prefer a minimalist approach, you can omit the chestnut cream and simply sift cocoa over the top and decorate with extra raspberries.  Might be worth making the chestnut cream to serve on the side though … it’s actually quite good!

This is what it looks like from the side:

Serve immediately or keep refrigerated until ready to serve.  This cake keeps for a couple of days in the fridge but is best decorated on the day it is to be served.