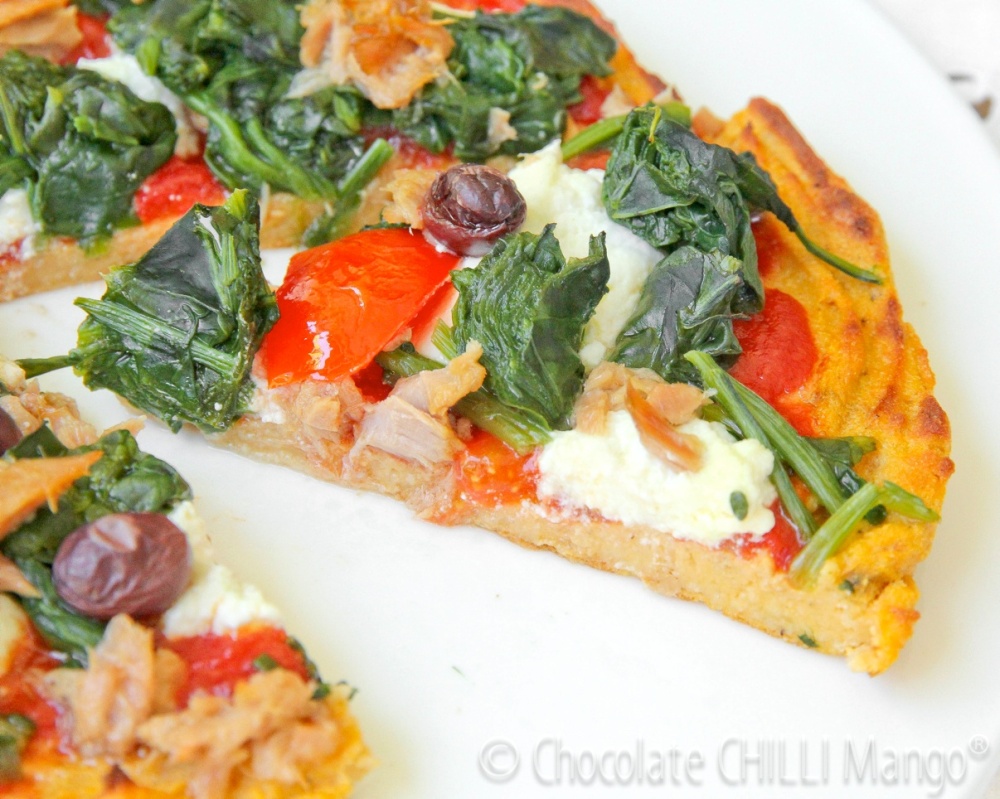 I love pizza.  It would be un-Italian of me if I didn’t, wouldn’t it?

Which is a damned shame, really, considering I have to stay away from all things wheat-based.

Ahhh, fructan intolerance, how dull life would be without you (cough, cough)!  Actually, it’s somewhat of a blessing in disguise.  Once you have to avoid or seriously limit your wheat intake for whatever reason, it really does liberate you.   There are so many flours to play with!  Plus, if you want to add some oomph to your protein intake with a dish, there are some amazing high protein flours that have started to become much more accessible in recent years.

Some of my favourites are quinoa, coconut, and amaranth flours, all of which are high in protein and contain a plethora of essential nutrients and trace minerals.  Of course, there are lots of gluten-free (and so also wheat-free) mixes available but so many of these have the nutritional value of the plastic or box in which they are packaged.  So rather than fool myself that I can mimic wheat perfectly and be disappointed … I’d rather find an alternative that is delicious, healthy and lets me have my pizza  aaaaaand

But I’d not attempted pizza before with the intention of making it a high protein version until … the wonderful and brilliant Anna over at Protein Pow(d)er Recipes mastered a fabulous protein pizza base sans wheat or dodgy ingredients – using sweet potato and buckwheat flour.   Yep, it’s a bit more pancake like, but it’s awesome!

I LOVE sweet potato!  Except I’m no great fan of buckwheat flour but I love quinoa and amaranth flours 🙂   Would it work?  Would it taste weird?  YES!  and NO!   It works beautifully and tastes deeelicious.  So, in a rare moment of recipe adaptation, I’ve adapted Anna’s fab recipe by playing with the ingredient ratios a bit, different flours, and adding in some psyllium.  The psyllium adds some extra fibre and improves the texture of the base.  Psyllium acts a little like gluten in baking but without the evil side effects and lots of goodness 🙂

When spread thin, the base gets nice and crispy around the edges but remains nice and soft in the middle.  It’s filling but not heavy.

Note the absence of protein powders.  I’ve actually made this a few times and tried adding some pea protein powder but you know?  It’s actually better without it.  The other bonus is that this makes it a recipe that is also suitable for the whole family … sneaking in some quality veggies with the sweet potato in the base.  Of course, if you don’t have access to liquid egg whites, rip open a pack of egg white protein powder, reconsitute and away you go.

My favourite topping is the one I made the first time around … just tomato puree topped with fresh ricotta, grilled zucchini, fresh sliced tomato, a little basil and some chilli.  But the version in the main photos was also grand – spinach, ricotta, tomato puree, a few Ligurian olives and some flaked tuna.   Top it with whatever you love best on your pizza.

It’s quick and easy to make.  Macros are included at the end of the recipe.

This is such a great post work out meal!   Yay, pizza!    Thanks Anna for leading the way 🙂

In a blender, or using a stick blender, blend together all the ingredients.  It will have a thick batter-like consistency, unlike dough.  Check for seasoning.  If making two pizzas divide the batter in half.

Spread the batter out into rounds about 4 millimitres in thickness on a non-stick tray or pan.  Bake for about 15 minutes or so until the base is set and fairly cooked through.  Remove from the oven.

Top the base with whatever you fancy!  Then, grill under a medium to hot grill for about 5 – 10 minutes until the pizza is cooked through and the edges are nicely browned and starting to crisp a bit.

Remove to a serving plate and serve immediately.

Nutritional Profile
The macros provided here are for the pizza base only, sans toppings, using quinoa flour.  Factor in the macros for whatever toppings you prefer to use.